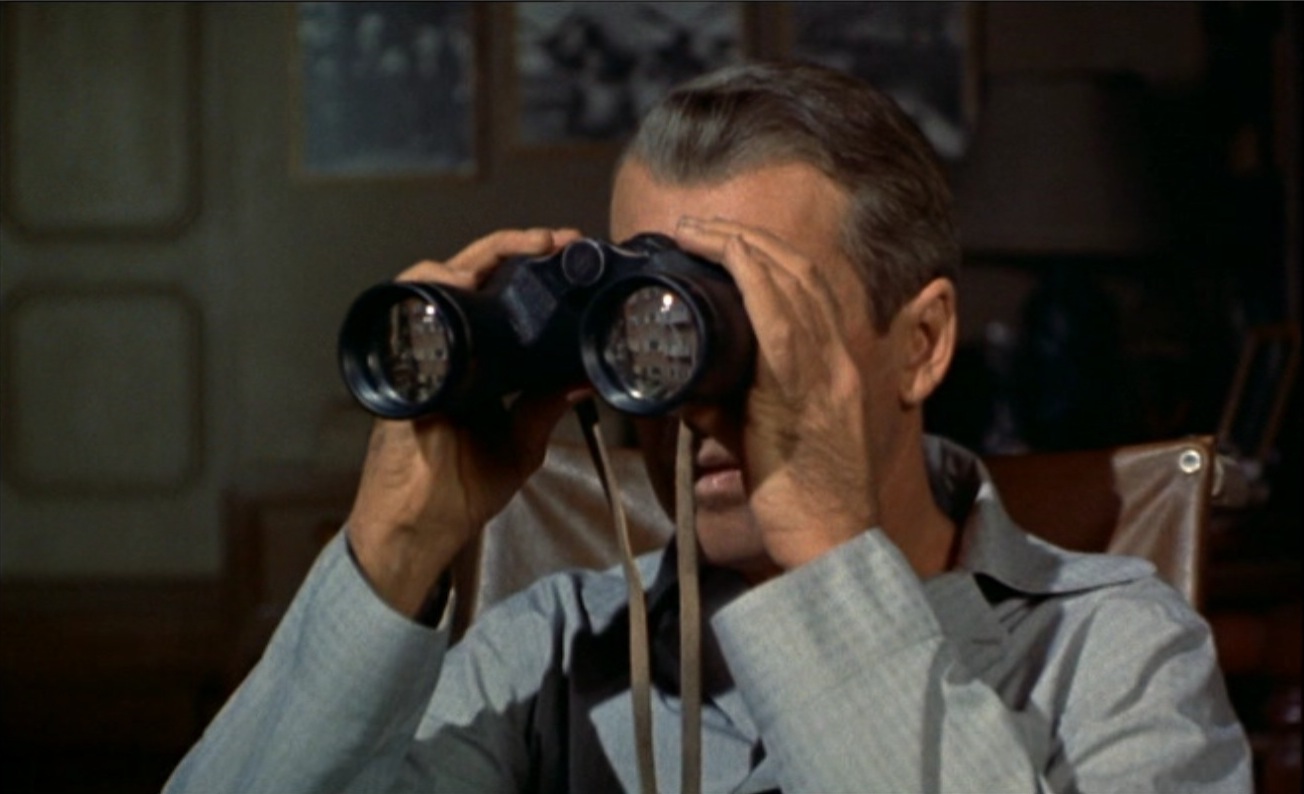 Rear Window (Hitchcock, 1954) has always been one of my favorites, and having too much time on one’s hands while the summer heat drives one crazy was really speaking to me. I’ve seen the film over a dozen times, and I can fall into the habit of watching it, but not thinking about it. So, it was with great joy in this latest viewing that I found new and different things to experience. As Pat Hitchcock noted, this is “Hitchcock 101–you have the anti-hero, the cool blonde, the humor, a grisly murder, a love story, and dialogue about food.” And I wanted to take a look inside that framework again.

I’m familiar with Edith Head’s work, and could likely spot one of her suits from a mile away, but I never thought about how she gave the distant characters a specific look to point to their connection to the main characters. I hadn’t considered Jeff’s passive role, how he desires what he sees from a distance, but not what he can touch. I hadn’t explored what role the neighborhood plays as a tool of justice, or about the increasing voyeurism and schadenfreude in my own backyard. I loved the use of music and sound design, but hadn’t fully connected the complex and total use of this diegetic sound. I didn’t know that Hitchcock himself was especially delighted at how much of the story he was able to tell visually, and the world he created (by the way, the film received Academy Award® nominations for Best Director, Screenplay, Color Cinematography and Sound Recording).

I marvel at how the changes to the source material (the master Cornell Woolrich’s short story “It Had to be Murder”) have resulted in some of my favorite touches. The character of Stella is vividly brought to life by the peerless every-neighbor Thelma Ritter. The romantic entanglement with Lisa is not in the story at all, and therefore neither is the heart-stopping moment when Lisa points to the dead wife’s wedding ring on her own finger, catching the murderer’s eye. Jeff’s broken leg ostensibly sets this whole thing in motion, while it’s only mentioned at the very end of the source story. That screenplay manages to take a sturdy frame and build a mansion from it.

I also enjoyed looking inside my own house for a change, as Stella suggests. With the opportunity to explore this film with Cole, I get to ask: Are you a snooper? Have we become a race of Peeping Toms? In today’s parlance, if you saw something, would you say something?

And it’s a great thriller, too.

What you’ll find in this episode: how Ericca used Stella’s words to woo Cole, what Cole thinks of Grace Kelly, what functioned as television before there was television, and creation versus destruction as the engine of the neighborhood.